Sometimes right in the middle of your day a story about kindness that you would never expect sneaks up on you and makes you smile from ear to ear!
Today, a friend of mine and her three children Joey, 11 Sopia, 6 and Giuliana, 4 were all walking into Hobby Lobby together when Giuliana noticed an older gentleman sitting in a chair resting. Giuliana’s response to seeing this man in the chair was “oh, you can buy old men here”? As if she was asking her mom if they could take him home.
The man, named Harry, overheard her question and burst into laughter that caused a ripple effect in Hobby Lobby to all unsuspecting shoppers passing by. It was a beautiful contagious, joyful exchange between strangers!

At four years old Giuliana and her family gave a gift of kindness to a stranger without ever having to lift a finger, spend money or go out of their way to do so. She gave them the gift of laughter, community and love! This little powerhouse of a four year old was responsible for creating something magical in a store full of shoppers that are often plugged in, tuned out and on a mission all of their own.

And ya wanna know what else? As if this wasn’t already enough! When all of the laughter subsided, Harry, having been so touched by Giuliana and the warmth of her family asked if he could hug her! She didn’t hesitate for one second!

I betcha Harry will tell the story of little Giuliana as often as he can because kindness, laughter and love get repeated In ways we will never fully grasp. Except for “Gi-gi” I’m pretty sure this little love knows full well the powers of love and kindness, in fact she is the one teaching us! 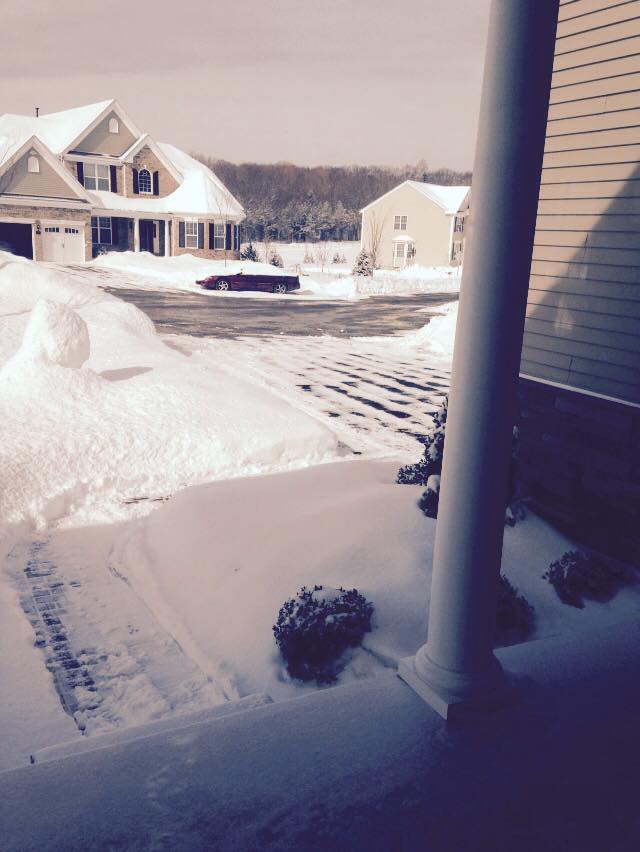 “I try to be so tough and so independent maintaining two homes and raising two kids on my own but it is not easy.”

Denise is a single mom of two who by all accounts, has her act together. You would think by talking to her and looking at her, that she’s strong, capable and has everything under control. And for the most part she does. She works hard to bring in an income, maintain her home, and provide for her children. So what would bring this mom to tears? A seemingly small act of kindness by her neighbor who she’s only met a few times. Without asking, he surprised her by plowing her driveway and shoveling her walk. It wasn’t until Denise had bundled herself up and prepared to handle yet another responsibility on her own, did she discover what her neighbor had done. And it brought her to tears. To think another person would do something unsolicited to make her life even a little easier touched her on a very deep level.

“After I gathered my composure, I walked over to him and said thank you. He replied “You’re very welcome.” No more words were necessary. He knew by the look on my face how much it meant.”

Thanks for sharing your story with us Denise. and thank you to her neighbor for your kindness.

Edgar
For the Love of Kindness
admin
0 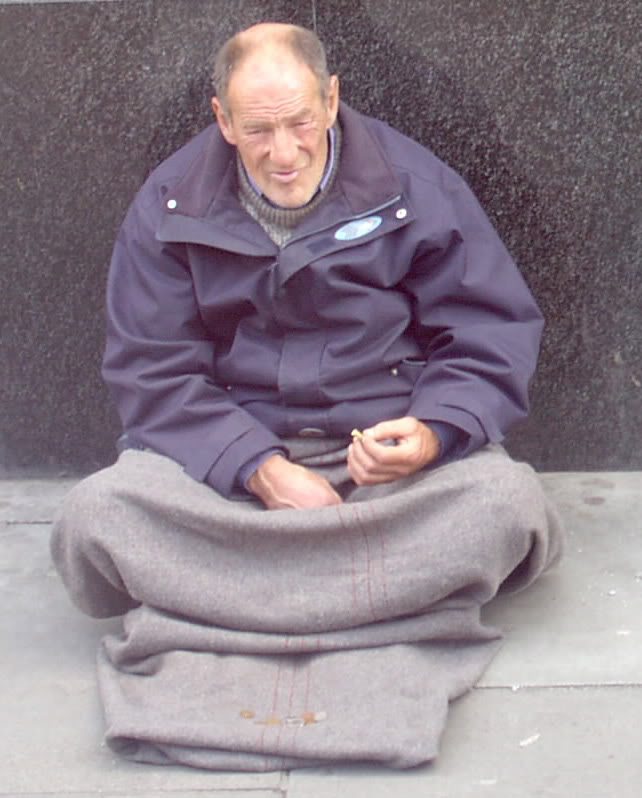 On a cold New York day, Amy and I headed down to Manhattan loaded up with hats and gloves to give away to anyone who may need them. We came across a man who appeared homeless sitting on the cold sidewalk, leaning against and equally cold building. We approached him and asked him if he would like a pair of gloves and a hat. He looked up at us and his face lit up like it was Christmas morning. “Yes! That would be great! I’ll take anything you got.” Amy handed him the hat and gloves, which he immediately put on. We found out his name was Edgar (because we ASKED.) We walked away feeling so good that we had something to offer someone and we did so without judgment. Likely thousands of people have passed Edgar by, either not even noticing him or not caring, and we wondered how many people cared to ask his name.

It doesn’t take much to be kind. A little goes a long way. Why even hesitate wondering if a person is worthy. Being human is enough.

We’re not sure who enjoyed the interchange more, him or us. On a cold day, on a cold sidewalk, in a sometimes cold world, Amy and I offered a little warmth. 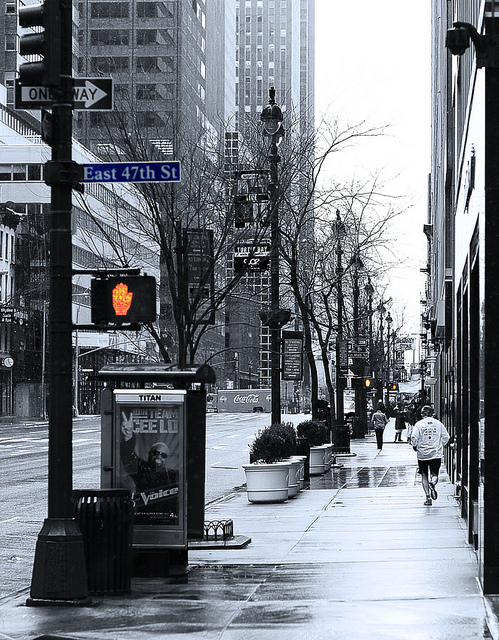 Often Amy and I go looking for opportunities to be kind and sometimes kindness finds us. While it wasn’t a major gesture in the moment, the kindness that found us came as a complete surprise.

While walking up Lexington Avenue in New York City on World Kindness Day, looking for opportunities to be kind to others, we paused on the corner of Lexington and 47th to decide which direction was calling us. As we paused, a gentleman turned to us and said “Are you ladies OK? Can I help you?”

Now, you may think that isn’t such a big thing . . . unless you’ve spent any time in the busy, hurried city of New York. For someone to notice we were looking for something AND to offer assistance was borderline miraculous. Wasting no time at all, Amy whipped out a copy of Share This Journal and handed to him. The light changed, and he began to cross the street, reading the cover. He turned with a huge smile, held the book up high and said “Thank you. This is awesome. I believe in helping others.”

What a wonderful intersection of us looking to be kind, it finding us and us being able to reciprocate. And it all happened on the corner of Lexington and 47th.

Commuter Kindness
For the Love of Kindness
admin
0 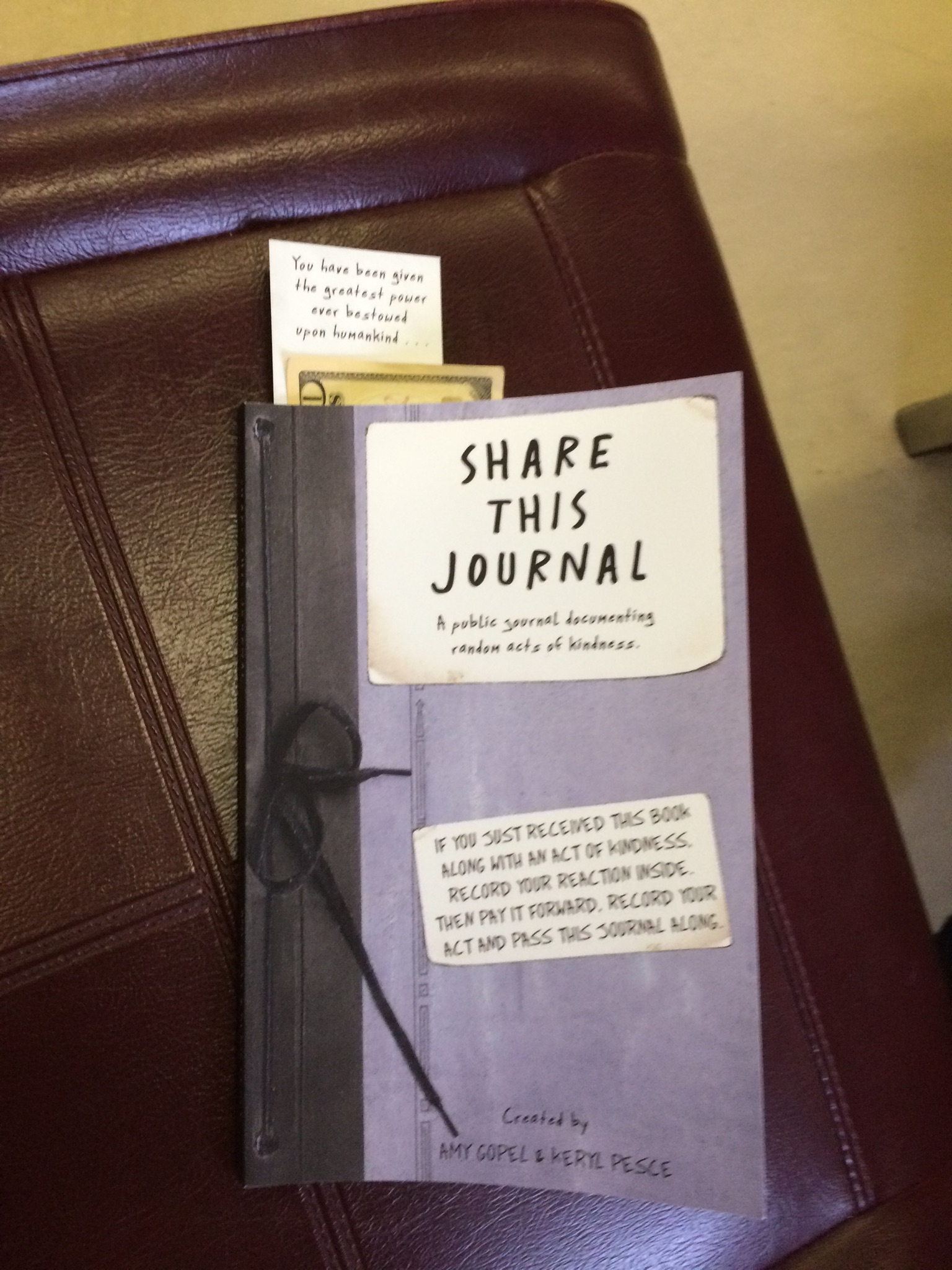 This photo was shared with us by Elaine from Poughkeepsie, NY. She left her journal on a Metro North Railroad train as she exited in Grand Central Station yesterday. She dedicated the journal to her mom who she says is awesome and is her example of love and kindness. She stuck a $10 bill inside with the hopes that it will make someone’s day that a stranger would be willing to do this. Maybe someone with plenty of money will find it or maybe someone who is down to their last dollar will find it. Either way, someone will find it, their spirits will be lifted and our hope is they will pay it forward. Thanks again Elaine for sharing! XOXO 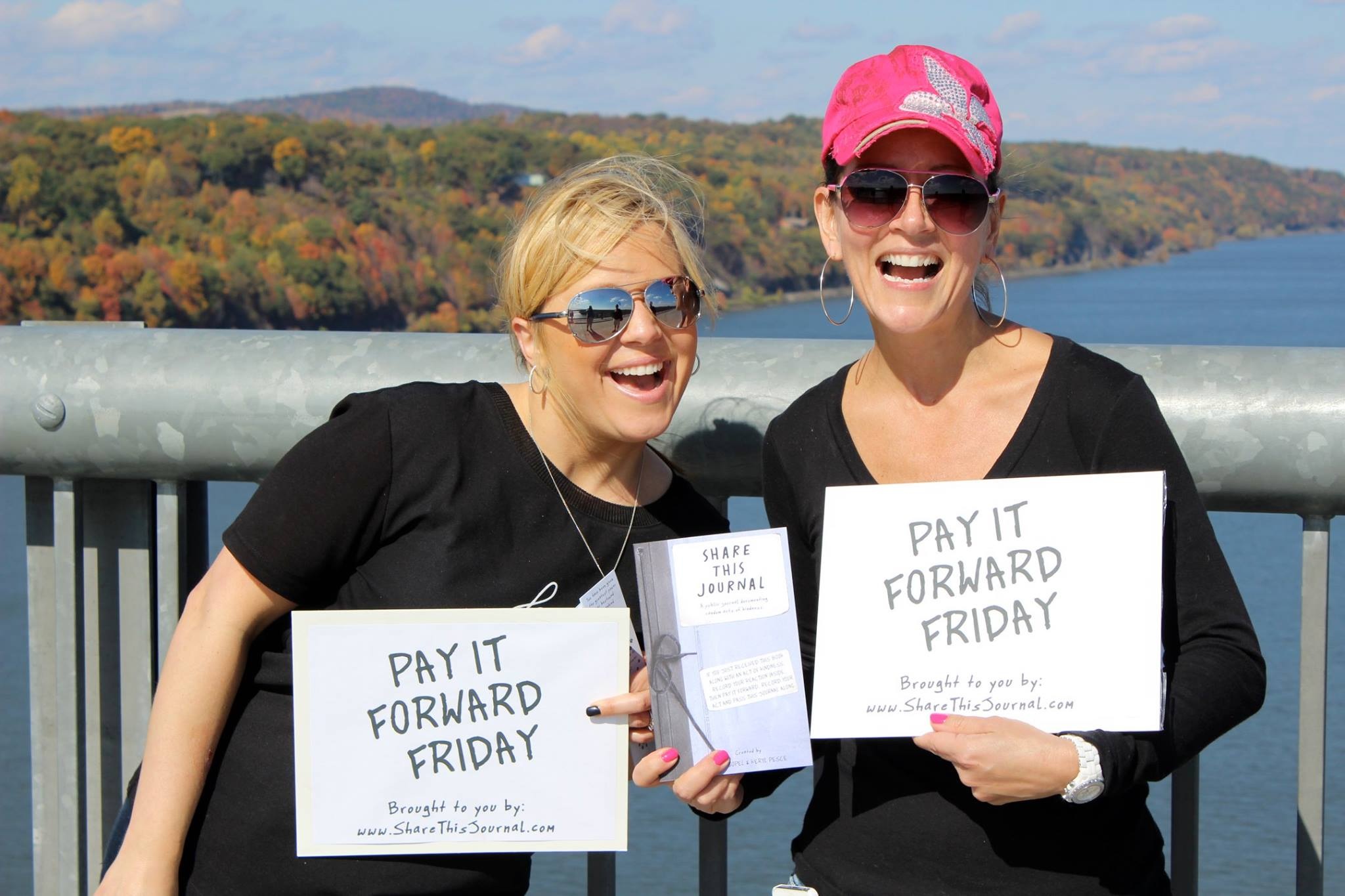 On a gorgeous autumn day in Poughkeepsie, NY, Amy and I got a little exercise and made our way to the center of the Walkway Over the Hudson (a former railroad bridge turned park that spans the Hudson River) to hand out free bottles of water to anyone who wanted one. What was really cool about the experience is we brightened the days of others whether they wanted water or not. Many people said “No thanks. I’m good, but I love what you’re doing.” Even a kind gesture spreads good feelings. We met a woman named Dolly who was turning 91 the following Monday. Her son was pushing her in a wheelchair and as I handed her the water, she reached her arms up to hug and kiss me. Water . . . that’s all we were handing out. Something even that simple makes a difference. It was an awesome afternoon. We celebrated with after with a killer cheeseburger and glass of wine. 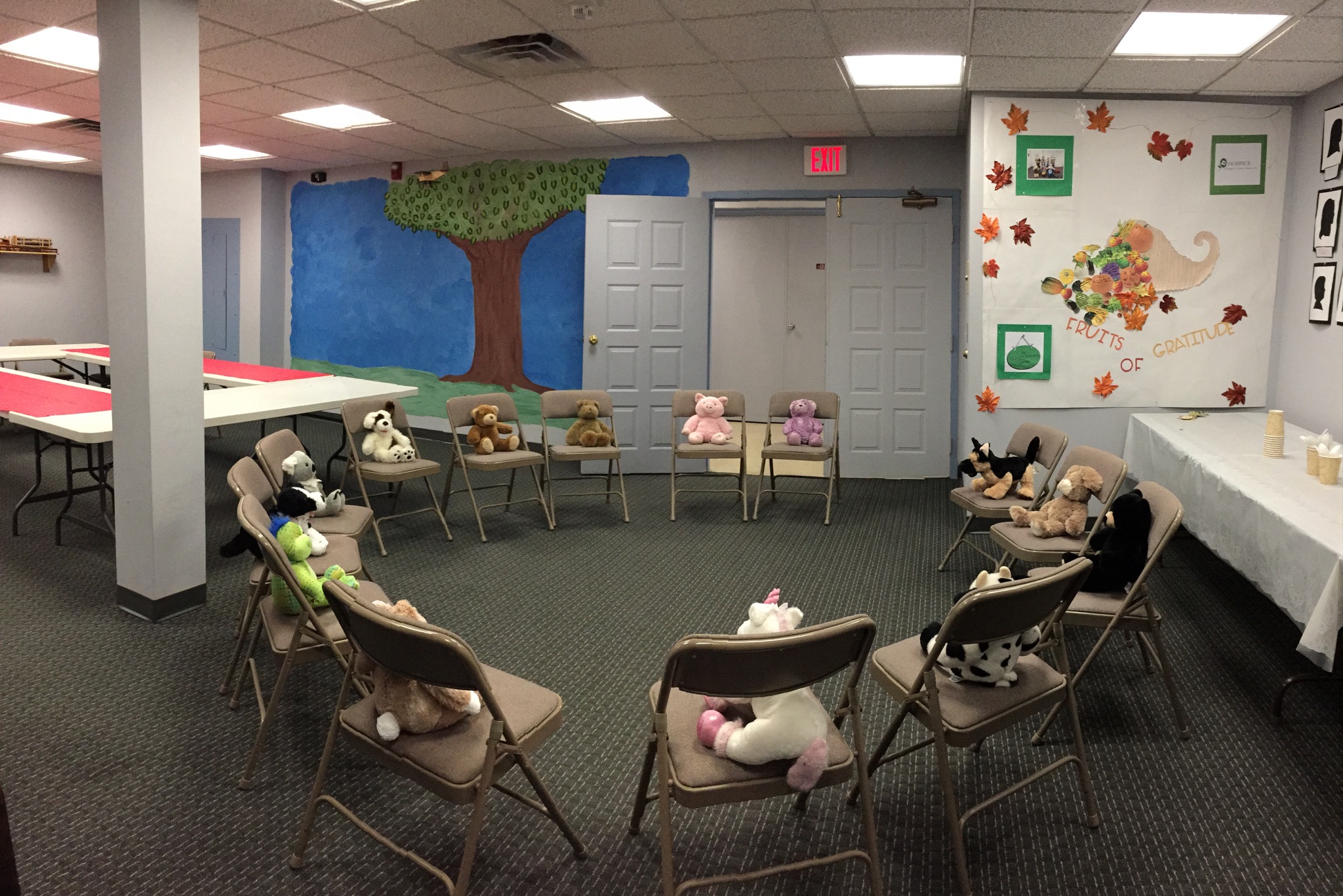 I am a volunteer of Hospice of Orange and Sullivan County in New York.  The concept of our book was born in our own grieving process when my young family dealt with a series of deaths and hospice worthy situations in over the course of nine years.  The ability to take a less than desirable situation and turn it into lessons of love is something that I have been gifted with.

Our daughter was 9 when our journey began; she lost two Grandmothers, two Grandfathers’ and an Aunt.  Raising a child while you are the primary caregiver of a person or persons on hospice is equivalent to walking a tightrope made of razor wire.  Every step you make is going to hurt; it’s a matter of learning how to take each step slow enough, that there are no serious scars left behind.

Our daughter watched as we went to each doctor’s appointment, cleaned up each mess, and cared for each loved one. It was rarely easy, but she witnessed firsthand the gift of giving without expectation.  She is now nearly 19 years old and although there were many nights we questioned our ability to keep going, I am telling you that our daughter is proof positive that our gentle steps on our razor wire tight rope taught her the true meaning of love, compassion and empathy.  The wisdom she gained from our experience could never be taught in a book.  She is now attending her first year in Penn. State, doing exceptionally well and thriving in ways we could never have dreamt.  We kept going, scar less.

As a result of our experience with the end of life as a young parent, I felt a compelling need to “give back” to hospice.   Our book in part, asks for donations to be made to hospice, but we also decided to donate our book to the children in the Grieving center at Hospice.  As a result of our donation, I was invited to speak to the families that were experiencing or had experienced the loss of life.

Each child received a teddy bear, they each had the chance to pick their seat with their parent and we began to discuss that although not every experience is the same that more often than not one of the best ways to remember someone that has passed on is by doing something kind for someone when you can.

I was able to get on the same level as the kids and really relate to the families in a way that as I was speaking I felt a charge in my heart that what I was doing was being led by a force higher than myself!  Each child was given a book and an opportunity to celebrate the life of a loved one lost by doing something kind for someone else.

One of the parents referred to the book as “an allowing” I thought this was a beautiful reference to our book.  It’s so rare that in this world we are given the chance of allowing, none the less given a tool or earthly prop that perhaps is being led by a force higher than we can take credit for.  Perhaps each book is given the wings of an angel, your angel, your lost loved one.  You just must believe, and then allow.

Christmas time is almost always associated with Santa Clause, and that’s great for most.  What I believe is the magic of Christmas is simply allowing and believing in the ability of something miraculous.  I had the honor of speaking with a parent at the close of our discussion.  She was given the gift of hope again.  Hope that perhaps her mother’s loss of life was not in vain and that she could carry out her memory by using our book to create moments in other’s lives that her mother had created for her in her family through the years.  Our book is the gift that keeps on giving and I can’t tell you how honored we are to be a part of it!  The night that I spoke at hospice allowed me the opportunity to give back a little hope to a young grieving mother and that my friends, is Christmas… the belief in the ability of something miraculous.